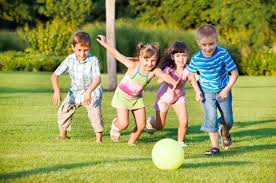 Encouraging children to spend more time outdoors may be a simple and cost-effective way to improve their vision as well as general health, according to several recent studies.

They add to the growing evidence that spending time outdoors may lower the risk of nearsightedness in children and adolescents. Nearsightedness is more common today in the United States and many other countries than it was in the 1970s.

One of the new studies showed that for each additional hour children spent outdoors per week, their risk of being nearsighted dropped by about two percent. Nearsighted children in this study spent on average 3.7 fewer hours per week outdoors than those who either had normal vision or were farsighted. The study investigated whether children who logged more outdoor time also spent less time performing near work, such as playing computer games or studying, but no such relationship was found.

A second study found that when schoolchildren were required to spend 80 minutes of recess time outdoors every day, fewer of them became nearsighted when compared to children who were not required to spend recess outdoors. Another study, with Danish children, was the first to show that the rate of eye growth varies in relation to exposure to daylight. This is important, because if the eye grows too long, as measured from front to back, the child will be nearsighted. The children’s eyes grew normally during the long days of summer in Denmark, but grew too fast during the short days of winter.

Though researchers don’t yet know exactly why outdoor time is beneficial, they think it’s probably related to exposure to daylight rather than to playing sports or other specific activities.